Industry experts have said that biosecurity remains the most effective tool in protecting pigs against dangerous diseases like PRRS, PED, and ASF. With many emerging and re-emerging diseases today, the importance of good biosecurity cannot be overemphasized, writes HA THU.

Pig farmers tend to let their guard down when the peak of a dangerous disease has passed, or when looking for ways to cut costs during times of low pig prices, livestock consultant Michel Guillaume observed.

“This carelessness will lead to the re-emergence of many traditional diseases and increase the risk of new diseases,” he told Asian Agribiz.

PRRS, PED, and classical swine fever are diseases that have caused large epidemics and have never been eradicated. Negligence and cutting back on prevention inputs such as vaccines and disinfectants can lead to a resurgence of these diseases at any time, said Dr Guillaume.

“The only way to protect the animal from diseases is to maintain pig care as if there is a circulating epidemic,” he added.

Clean pigs, clean farms, and clean habits make up the core of biosecurity in the ASF era, according to swine consultant John Carr.

He told Asian Agribiz that reinfection rates are high in ASF-affected areas. Thus, repopulation post-ASF must start with clean pigs. This means farmers must test piglets to ensure that they are free of pathogens.

Farmers can use lime to clean and disinfect the farm after being infected with ASF. “Lime is a cheap disinfectant. The heat from the lime kills the virus, and lowers moisture in the farm environment,” said Dr Carr.

He stressed that farmers must make sure that every surface of the farm is clean before introducing new animals.

To eradicate ASF, farmers must first get rid of old habits. Farmers visiting each other, dirty boots and clothes, and unwashed feed trucks are potential carriers of pathogens. “Continuing these practices will waste any biosecurity efforts,” Dr Carr stressed.

PED and PRRS are among the most prevalent diseases in Southeast Asia.

He suggested that farms review, update, and implement biosecurity practices regularly. “A biosecurity assessment can identify risks and mistakes,” he said.

Among the practices to include in a biosecurity program are 1) isolation of breeding pigs to monitor their health conditions before introducing them to the farm; 2) a good vaccination program using good quality vaccines; 3) monitor biosecurity especially in transition areas, the sow areas, and the porker areas; and 4) strict control of people, vehicles, supplies, equipment, food, and veterinary drugs in and out of the farm.

“My only advice is do not neglect biosecurity. When we stop letting our guard down and change the way we address pathogens and diseases with constant biosecurity, then we minimize, if not avoid, the risk of diseases,” said Dr Guillaume.

For related stories, please see:
Pig repopulation after ASF is possible, but at what cost?
Neglecting biosecurity could lead to re-emergence of diseases

Silver lining from ASF in Asia 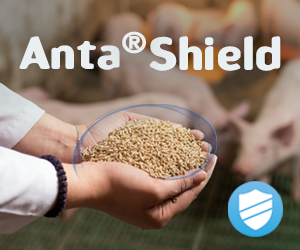