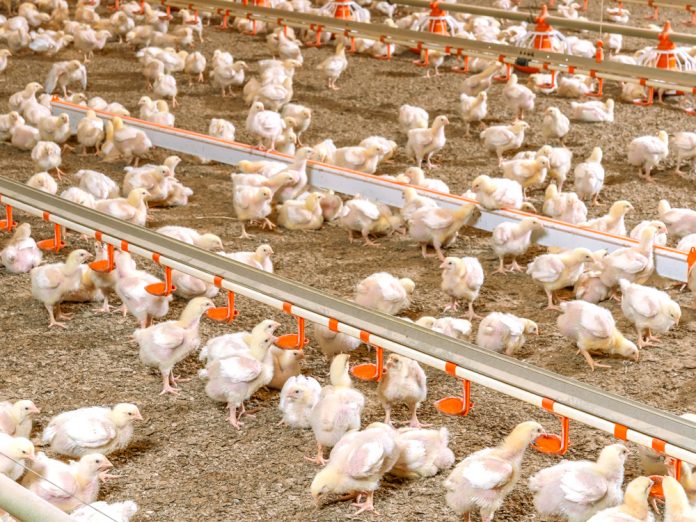 Water is a critical component of broiler production not only as an input for drinking and cooling but also removal for litter condition in conventional housing systems. Optimal water intake is needed to maximize broiler health, welfare and production. In addition, optimizing intake contributes to sustainability of broiler production through its role in use of water and energy (ventilation), increasingly scarce resources.

Rapidly growing broilers consume a lot of water for maintenance and growth. This water is physiologically necessary and broiler performance will decrease if water intake is restricted. However, many factors can increase water intake above physiological necessity. Most of the water consumed by broilers is evaporated and excreted. Water excreted to litter plus water from drinker spillage, condensation and other sources must be evaporated then removed by ventilation from the broiler house to prevent litter deterioration and maintain a productive and healthy growing environment.

Litter management is a large and important topic but is not covered in detail in this technical article.

Broiler water balance consists of water intake (drinking and feed), metabolic production, retention and loss (evaporation and excretion). Collett (2012) and several others have published estimates of broiler water intake and excretion. Dunlop et al. (2015) and Dunlop (2017) recently reviewed this literature and described a model to estimate broiler water balance and deposition to litter in a broiler house. Variables include broiler performance (daily and cumulative growth and feed intake), bird density (to calculate biomass), water:feed ratio (to calculate water drunk) and proportion of water loss through excretion versus evaporation. Typical water balance values proposed by Dunlop (2015) for healthy broilers grown with optimal feed in thermo-neutral conditions are:

• Metabolic production: Water is produced by metabolism (oxidation of carbohydrate, lipid and protein), about 0.55 ml/g of starch, 1.07 ml/g of fat and 0.41 ml/g of protein metabolized. Dunlop (2015) assumed metabolic water production to be 0.14 ml per kcal of feed ME consumed.

• Retention: About 70% of daily growth is retained water.

• Evaporation: About 50% of water loss in thermo-neutral conditions is through evaporation. Birds do not have sweat glands so almost all evaporation is from lungs and air sacs through respiration. This water vapor is removed from broiler houses by air movement (ventilation).

• Excretion: Water is excreted in feces and urine, accounting for the other 50% of water loss. In conventional housing, this water is deposited to litter and must be removed by evaporation to prevent litter deterioration.

This water excretion is physiologically regulated, unavoidable and cannot be reduced without depressing broiler performance. However, other mostly controllable factors can increase water deposition to litter.

A multitude of factors contribute to excessive water excretion and many are interrelated. Problems can be chronic or sporadic, with considerable variation between seasons, farms and individual broiler houses. Causes can be difficult to identify and collaboration between technical specialists is often needed to diagnose and rectify problems. Whatever the causes, broiler growers are left to deal with the consequences.

Many causes of excessive water excretion are linked to nutrition and feed:

Sodium (Na). Excess Na in salt is well known to increase water intake and excretion. Increased water intake, litter moisture content and foot pad dermatitis incidence as salt in feed increased has been shown. Na levels from all sources should be minimized to reduce water excretion but deficiency must be avoided.

Chloride (Cl) seems to affect water excretion considerably less than Na and K but some evidence indicates Cl effect is similar to Na and K. Lysine hydrochloride and choline chloride are, in addition to salt (NaCl), significant sources of Cl in broiler feeds. Cl levels can be minimized by replacing salt with other Na sources such as bicarbonate and sulfate. However, sulfate may have similar effects on water excretion as Cl.

Dietary electrolyte balance (DEB). The recommended DEB (Na+K-Cl) for broiler feed is 220-230 mEq/kg. Water intake increases with higher DEB and decreases slightly with lower DEB, but broiler performance may be worse with DEB much above or below recommendation.

Soluble NSP in grains, for example arabinoxylans in wheat and β-glucans in barley, increase water intake and cause sticky droppings. Xylanases and glucanases in feed alleviate if not eliminate these problems. Other plant-based ingredients, including SBM can contain significant levels of soluble NSP other than arabinoxylans and β-glucans. Products with enzyme activities targeting these NSP are available to improve digestion and reduce water excretion.

Phytate in plant-based ingredients contains valuable phosphorus (P) and is anti-nutritional. Most broiler feeds now include phytase to release P from and reduce adverse effects of phytate. Phytase also releases other minerals and increases digestible amino acids and energy. Increased water excretion can occur with phytase if formulation adjustments are not made for other minerals released. Phytase matrix values for feed formulation should include at least Ca and Na in addition to P.

Although SBM is an excellent and economic source of digestible amino acids, several components increase water excretion. Firstly, potassium content is high (typically 2.0-2.5%). Secondly, the 35-40% total carbohydrate content of dehulled, solvent SBM consists mainly of NSP 17-27% and free sugars 10-15%. The NSP are mainly a mixture of pectic polysaccharides such as rhamnogalacturonans and arabinogalactan, with cellulose the second most abundant. The free sugars are mainly oligosaccharides with approximate composition sucrose 50%, stachyose 40% and raffinose 10%. The sugars and about 45% of the NSP are soluble and these soluble components contribute to sticky droppings and excess water excretion. Thirdly, trypsin inhibitor is a possible cause of feed passage and excess water excretion (Ruiz, 2015). This author recommended the maximum urease activity for SBM be reduced from the usual 0.20 to 0.05 pH units, provided KOH solubility was at least 78%.

All fats and oils have the potential to become rancid by oxidation resulting in reduced digestibility that can cause gastrointestinal disturbance, diarrhea and ‘greasy’ excreta. Unsaturated fatty acids in ingredients exposed by processing to oxygen, such as unextracted rice bran, are particularly susceptible to oxidative rancidity unless stabilized.

Mycotoxins have been implicated as a cause of excess water excretion in broilers, but information is limited, especially on relevant feed contamination levels and interactions between mycotoxins when more than one is present. Many mycotoxins, including aflatoxins and fusariotoxins (DON, T-2, HT-2, zearalenone and fumonisins) can irritate the digestive tract and may cause diarrhea. Ochratoxins (especially A), citrinin and oosporin are nephrotoxins that can impair kidney function and cause excess water excretion. DON (deoxynivalenol) at 5 ppm in feed was reported to increase water intake in broilers. Surveys indicate DON is the most prevalent mycotoxin in feeds and perhaps the mycotoxin most likely to be a cause of excess water excretion.

Biogenic amines are reported to cause gizzard erosions, maldigestion, enteritis, increased water intake and wet, smelly litter. The amines are typically found in fish and animal protein meals produced from raw materials exposed to microbial spoilage before processing. Microbial fermentation decarboxylates amino acids in proteins to form biogenic amines that remain in meals after processing. Histamine is the main biogenic amine found in fishmeal whilst putrescine and cadaverine predominate in meat (MBM), poultry offal and feather meals. Biogenic amine toxicity from poor quality fish or animal protein meals in feeds may be a cause of maldigestion and wet litter.

Water intake is higher with durable, sieved pellets than with unsieved pellets, crumbles or mash, but performance (feed intake, growth rate and FCR) and cost may be worse with unsieved pellets, crumbles or mash (high fines / dust). Larger feed particle size, structural fibre and whole grains may improve enteric health and reduce water excretion. Major changes in feed formulas can cause digestive disturbance and should be made gradually.

These factors should not be overlooked as causes of excess water excretion. Minerals should be analyzed regularly in ingredients with high or variable mineral content and matrix values adjusted. Meat (MBM) and fish meals can have salt content well above usual specifications. Limestone may contain high levels of Mg (dolomitic limestone) but is more likely to cause excess water excretion in breeders and layers than broilers because of low inclusion in broiler feeds. Feed enzymes need to be accurately added and mixed in feeds, and dry forms must to be sufficiently heat stable to survive steam pelleting. Errors can be made in addition and mixing of minerals (including limestone, salt, sodium bicarbonate) and of AGPs, coccidiostats and other additives important for enteric health.

*Dr Tim Walker ([email protected]) is a consultant based in Australia. Part 2 of this technical article focuses on gut health and environmental factors that affect water excretion and litter condition. References are available to the author. 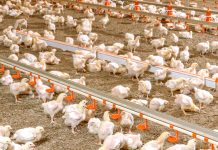 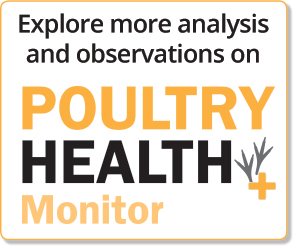