After confirming ASF in the state, government officials in Tripura, northeast India will start on mass pig culling. Authorities tested samples from dead pigs in mid-April after several died at a government farm in the Sepahijala district. The culling program will happen across different parts of the district. Since end-March, at least 65 deaths have occurred in indigenous and European breeds. A task force has been set up with administrative officials and veterinarians to deal with the situation. 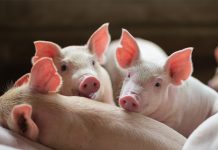 ‘Gut cleaning’ – A new innovation for health and efficiency in swine