SI-TRUNG TRAN and FELLIPE FREITAS BARBOSA* explore why the interaction between mycotoxins and endotoxins poses significant risks for pig producers and how toxin-mitigating solutions can support management strategies.

The pig industry has recently experienced lower profit margins per animal due to many factors, including disease, farm conditions, feed quality, and management. Pig producers should, therefore, make reasonable decisions based on an evaluation of the benefits to pigs’ performance. Using reliable indicators such as average daily gain, feed conversion ratio, and mortality percentage, the risks for losing profitability in pig production can be quantified. With these, one can estimate the cost-effectiveness of prevention solutions to increase pig producers’ future competitiveness. Toxin challenges are a crucial example: Studies show that closed-type pig houses with high animal density lead to a poor indoor hygiene environment, which can be contaminated with bacteria that produce endotoxins. In addition, mycotoxin exposure through poor feed quality is also a concern for pig health and performance.

Understanding the threat: the interaction between mycotoxins and endotoxins

Mycotoxins are fungal secondary metabolites, which often contaminate agricultural commodities. Endotoxins are a major component of Gram-negative bacteria’s outer membrane, which are released into the environment, or into the gastrointestinal tract (GIT). These low-molecular-weight compounds are xenobiotics and are toxic to animals. Respectively, they cause the diseases known as mycotoxicosis and endotoxemia.

It is not always easy to diagnose a mycotoxicosis in animals due to the diverse non-specific symptoms. Mycotoxins negatively impact the GIT, causing histological damages that lead to poor digestion, immune suppression, impaired barrier function, and, consequently, reduced performance. Among the most common mycotoxins, deoxynivalenol (DON) and fumonisin B1 (FB1) have shown to alter the absorptive functionality of the intestine by inducing changes in the epithelial microvilli morphology and barrier integrity. These changes may include reduced microvilli height, microvilli fusion, and atrophy of the tissue. Moreover, masked mycotoxins pose hidden threats to animal health and performance: due to their presence as conjugated forms in grains and byproducts, they are not detected using conventional technologies. The release of masked mycotoxins during the digestion process in the GIT may play an important role in understanding the impact of low levels of mycotoxins in pigs and other animals.

Endotoxins, also known as lipopolysaccharides (LPS), depress growth performance and feed efficiency by a different method. When present in the bloodstream, they provoke an elevated immune response, inducing the utilization of large amounts of energy. Oxidative stress, septic shock, and even death are consequences of elevated blood endotoxins. LPS are anchored to the bacterial cell membrane by one of their three components: lipid A. When LPS are released, the host cell membrane protein toll-like receptor 4 (TLR4) are signaled by the lipid A, initiating the humoral immune reaction. Inflammation and fever are critical evaluable factors that indicate endotoxin passage into the bloodstream. Septic shock can occasionally follow and is a microbial infection that produces fever with concurrent hypotension, hypoxia, and intravascular coagulation.

Impact of mycotoxins and endotoxins in the GIT

The GIT is the first crucial physiological barrier to prevent harmful intraluminal substances – including foreign antigens, bacteria, and endotoxins – from passing into the porcine organism. In some cases, the presence of mycotoxins and endotoxins may lead to an additive or synergistic interaction. The presence of DON or FB1 (or both) impairs the proteins that form tight junctions such as claudins and ZO-1. This results in increased intestinal paracellular permeability, and thus higher mycotoxin, endotoxin and bacterial translocation through the intestine. The increase in endotoxins and in bacterial passage through intestinal epithelial cells has major implications for pig health: inflammation and enteric infection are likely results. Mycotoxins can also modulate the gut microbiota composition by increasing the populations of pathogens, mostly of Gram-negative bacteria. This modulation also increases endotoxin risks for the host animal.

Impact of mycotoxins and endotoxins on immune response in pigs

Besides increasing the translocation of bacteria and endotoxins and modulating gut microbiota, mycotoxins can also impair the immune response and enhance the susceptibility to infectious diseases.

Studies have found aflatoxins (AF) to act primarily on cell-mediated immunity and phagocytic cell function. When ingested by sows, AF can negatively impact the offspring. The immune system of lactating piglets was affected when sows were exposed to a mixture of AF B1 (400 ppb) and AF G1 (400 ppb) during gestation and lactation. Blood lymphocyte proliferation and neutrophil function, including motility and chemotaxis, were inhibited in the piglets from aflatoxin-treated sows. In another study, thymus weight decreased and thymic cortical lymphocytes were depleted in piglets from mycotoxin-exposed sows. Inflammation pathways in the intestine are also affected by ochratoxin A, significantly reducing inflammation-related cytokines in the intestine of piglets exposed to the toxin.

Fumonisin toxicity stems from the inhibition of the sphingolipid metabolism, which contributes to lower immunity. Suppressed lymphocyte blastogenesis and low antibody titers to pseudorabies virus were found in pigs after 14 days of consuming feed containing either 33 ppm or 100 ppm of FB1. Ingesting FB1 is also associated with a reduced expression of inflammatory cytokine IL-8, which is involved in the recruitment of inflammatory cells in the intestine during infection. The increased susceptibility of FB1-exposed piglets to E. coli infection is thus in part due to the decrease of intestinal IL-8. However, FB1 also impairs other immune proteins such as IL-12p40 and MHC-II, lowering the function of intestinal antigen-presenting cells. This also plays a vital role in the higher susceptibility to disease.

Trichothecenes type A, B, and D can stimulate and suppress immune function by deregulating cytokine production and by inducing apoptosis. The transition between these two effects occurs with increasing concentration of trichothecenes. Trichothecene exposure in vitro impairs or enhances mitogen-induced lymphocyte proliferation, depending on the dose. The rank order of potency among trichothecene classes for in vitro inhibition of lymphocyte proliferation assays is: type D macrocyclic group (eg, roridins and verrucarins) > type A group (e.g., T-2 toxin and diacetoxyscirpenol) > type B group (eg, DON and nivalenol). In a pig jejunal explant model, DON triggered innate as well as adaptative immunity. In vivo, exposure to DON induces a pro-inflammatory response with a significant increase in expression of TNFα, IL-1α, IL-1β, and IL-8 in pig intestines. The presence of other challenges (Salmonella Typhimurium in intestinal loops, DON potentiated inflammation, leads to a detrimental interaction in pig’s health and performance. Trichothecenes are cytotoxic to macrophages and other immune cells. DON, in particular, has been reported to depress IgM and IgG at a level of 2 ppm, a mechanism that accounts, in part, for its immunosuppressive effects.

As we saw, endotoxins are toxic parts of the cell wall of both pathogenic and non-pathogenic Gram-negative bacteria. They can induce a systemic inflammatory response in animals. The immune effect of endotoxins in pigs hinges on activating the nuclear factor kappa B (NF-kB), an inducible transcription factor, through the TLR4 pathway. Pigs exposed to endotoxins have higher circulating neutrophil and lymphocyte counts, IgG and IgE levels, interferon-gamma (IFNg) and IL-4 productions. Constant exposure to endotoxins may alter pigs’ immune profiles (Table 1), deviating nutritional resources to produce the response and thus hindering performance.

Which factors increase susceptibility to mycotoxins and endotoxins?

Weaning is a crucial stage of porcine development. The withdrawal of milk antibodies, the feed change, and the stressful mixing of litters increase pathogenic E. coli. Infection can be transmitted directly from older, affected, or recovered pigs through fecal contact. The bacteria can also spread through clothing, vehicles, or footwear contaminated with infected feces. Endotoxins are continuously shed during bacterial growth, leading to a moderate and sometimes severe toxic status after endotoxin release during exponential growth. Early weaning augments susceptibility to endotoxins. A synergistic effect of bacterial toxins (endotoxins and exotoxins) may also occur, causing post-weaning diarrhea. Furthermore, trichothecenes were found to increase the permeability of the blood vessel wall and intestinal mucosal epithelium. Thereby, they cause leakages of plasma contents into the intestinal lumen, which eventually leads to diarrhea. Mycotoxins and endotoxins are, generally, major threats to pig health, welfare, and performance (Table 2, Figure 1).

Figure 2: Endotoxin quantification in International Units (UI) per mL of solutions with different inclusions of MSG and 34800 IU/mL (≈10µg/ml) of endotoxins.

Different solutions are currently applied to mitigate toxin risks in animal production. Some focus on adsorbing mycotoxins during their passage through the digestive tract, resulting in the excretion of the toxins in the feces. Certain compounds known for their ability to mitigate the adverse effects of mycotoxins have also been tested for endotoxin adsorption. The results indicate that specific toxin-mitigating products offer a practical and economical solution to reduce the challenges caused by both endotoxins and mycotoxin exposure in animals. For instance, Mastersorb Gold (MSG, EW Nutrition GmbH) has recently shown efficacy in reducing the effects of feed-borne mycotoxins. Repeated analyses of MSG in vitro have demonstrated its high mitigation capacity against both mycotoxins and endotoxins. The results obtained from independent laboratories showed that MSG could efficiently bind LPS in a dose-dependent manner (Figure 2).

Figure 3: Immunofluorescence in IPEC-J2: The negative control (left): no challenge, contain neither endotoxins (LPS) nor MSG. Challenge with endotoxins (20µg of LPS/mL, serotype O111:B4 from E. coli) without (in the middle) and with MSG (right).

Binding endotoxins in the gut lumen may reduce the impact of these molecules and their potential to enter the bloodstream. Still, the binding of endotoxins by commercial products has not been widely researched yet. An evaluation of binding substances under in vitro conditions provides a screening point and deeper insights into the mode of action. In an internal study at EW Nutrition’s research center in Japan, the analysis also indicated a high binding capacity of MSG for various concentrations of endotoxins (Table 3).

Moreover, MSG has also been tested in a cell model using intestinal porcine epithelial cells from the jejunum (IPEC-J2) and an LPS challenge of 20 µg/mL. The experiment confirmed that MSG is innocuous to the cell line and demonstrated the beneficial effect that MSG potentially exerts at an intestinal level in the presence of the challenge. It mitigated the effects of LPS, reducing inflammation, as evidenced by the lower immunofluorescence of NF-kB and IL-8 levels in the MSG + endotoxin groups (Figure 3).

Mycotoxins are generally immune suppressive which predisposes the animal to other diseases such as pathogenic bacteria or endotoxin. In contrast, endotoxin or lipopolysaccharide (LPS) is an essential component of Gram-negative bacteria and are always present in the gut, even in healthy animals. Both endotoxin and mycotoxins activate the immune system, reduce feed intake, interfere with reproductive performance, damage vital organs, sepsis and inflammation, and can cause death. 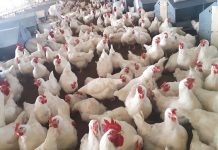