Preventing E coli infections is important to secure profitability as this disease can affect poultry growth and production.

According to Virbac India, the infections are triggered by immune suppression or by weak management in poultry farm. It can spread through fecal contamination and through contaminated eggs.

Symptoms may vary depending on the severity of disease and the environment. However, some symptoms of E coli are ruffled feathers, depression, less feed intake, coughing, and change of voice in breathing.

First, E coli can attach on dust particles and then be inhaled by the birds. The particles go to abdominal air sacs and then attach to follicles/ovary.

Second, E coli can infect via intestinal tract. Lesions of coccidiosis, enteric viruses, and heat stress “can open the gate”, in this case tight junction between enterocyte cells, so that E coli in intestinal lumen can enter the vascular system.

Third, E coli can also infect via reproduction system. It goes up from uterus to infundibulum and ovary. This is called salpingitis.

“E Coli have many different types and combination of proteins. The combination of O and K proteins is used for its classification,” Dr Prajitno said.

“The management should be supported by the use of organic acids, probiotics, and proper water sanitation,” he suggested.

“To be noted, chlorine is not effective if the water pH is more than 8,” he added.

FMD risk in Vietnam low, but farmers urged to be alert 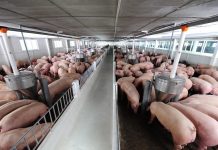