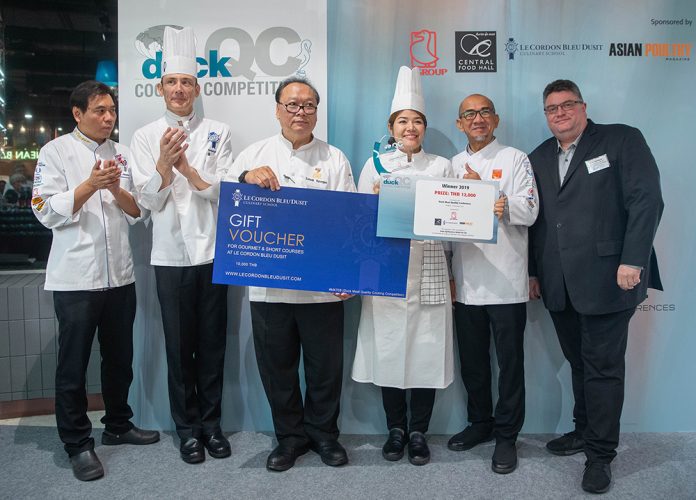 Bringing the passion of a high-energy kitchen and the thrill of a one-hour timed competition, five young culinary talents were challenged to deliver a dish. The protein component was boneless duck breast and a two joint duck wing.

The unique setup was at Bangkok’s finest premium supermarket Central Food Hall at Central World. Known for offering a world class exclusive selection of new food products from around the world, Nick Reitmeier Executive Vice President of Central Food Halls — and one of the five jury members —welcomed this original cook-off initiative on duck meat.

“It’s great to see the industry, chefs and retailers come together to promote Duck meat. This is the first time that a serious cooking competition is held in the supermarket that is not fully equipped with cooking equipment. It’s not an easy task, but it’s interesting enough to draw attention of people around,” he said.

Although organized under many constraints, the competition was accomplished in line with the professional practices of such culinary competitions, said Chef Prachan Vong-uthaiphan, Chairman of the judging panel.

“In terms of professional standards, the organizer, the judges and the contestants were excellent. Despite the lack of publicity, the event drew a huge crowd of guests and onlookers,” he said.

Chef Prachan is Executive Chef at Arnoma Grand Bangkok Hotel and also an executive member of the Thailand Chefs Association. He lent support to the competition as he saw this as an opportunity to develop new duck-based recipes.

The competitors and dishes

Thaksina Sae-Uneg, student from Suan Dusit University presented a freshly smoked duck breast with cinnamon, bay leaves, star anise and orange peel, served with baked sliced potatoes containing a cream and egg custard. She added a rich pumpkin puree to her dish, a mulberry and red wine sauce reduction, accompanied by a crispy duck meatball. This was seasoned with cream cheese and prunes, some truffle crumble and sauté vegetables.

“The menus and cooking skills of the contestants are excellent, and the outcomes were fabulous,” concluded Nick Reitmeier.

However, it was freelance chef Purida Kaewsri who was announced the winner taking home a trophy and prize money worth USD 400.

Her winning dish ‘Super Duck’ consisted of seared duck breast served with a crispy duck meatball that was seasoned with bacon, pepper and thyme. It was accompanied by a duck and mushroom ragout seasoned with white wine, parmesan cheese and parsley, a mini puff pastry pie and duck roll. Her red wine sauce was slightly sweetened with maple syrup and finished off with some creamy cauliflower puree and sauté vegetables.

“I decided to make Super Duck in Thai style because I wanted it to reflect the identity of Thailand in this modern cuisine. It was the only Thai dish alongside the international ones at the competition,” said Ms Purida.

“I am delighted that my Super Duck won,” she said, adding that she rehearsed for a week and spent two days to prepare all the ingredients for the competition.

That a second duck quality cook-off edition involving much astronomic fervor and talent is expected, was more than a culinary understatement for all present professional foodies. 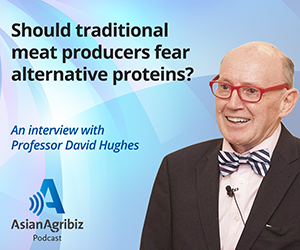 Charoen Pokphand Indonesia is still optimistic that its 10% sales growth target this year can be achieved amid difficult market conditions. The...
Read more
Meat

Thai Binh province's Department of Agriculture and Rural Development has confirmed that it has destroyed 152 pigs infected with ASF from 39...
Read more
Feed